What are traces and what do they do?

Traces are boxes of information commonly used to debug a gpc, get the information you may want from a game or get information from mods that may be running, and more. When in Zen Studio simply click Tools > Device Monitor or press the shortcut F3 on your keyboard. This will bring up Device Monitor where traces can be seen on the bottom right of the Device Monitor. 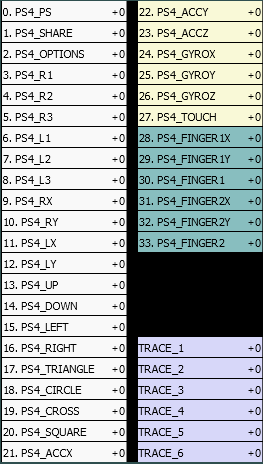 In this example is code of a basic dynamic Anti Recoil which takes advantage of the higher value limits of 32bit to scale a value up then back down to be accepted as a value to be used with a polar constant for a much greater degree of accuracy. The value being traced is the radius of the right stick scaled up higher before being scaled back. As the right stick is moved the value of the trace changes accordingly.

UP NEXT
Memory
Docs powered by archbee

TABLE OF CONTENTS
What are traces and what do they do?
16bit example
32bit Example