If you are not experienced with scripting, go ahead and skip straight to the Introduction👍

If you are experienced with GPC (or C) you will be happy to know that Cronus has finally added 32bit support for scripts!

GPC scripting is now available in both 16bit and 32bit flavors. These are each individual bits, they can be 1 or 0.

Previously, the variable calculation range with 16bit (-32768 to 32767), but now with 32bit that range has increased to a massive (−2,147,483,648 to 2,147,483,647), allowing for much more complex calculations that can be scaled up then back down while retaining a high level of accuracy, enabling a degree of precision not previously available.

The default compiler mode of Zen Studio is now 32bit. If you wish to compile an older 16bit script (every script ever released before Cronus Zen v1.2.0), you must use the 16bit compiler. Older scripts may also break due to using deprecated code. If you know what you are doing, you will know how to fix these issues from the information on this page.

get_ipolar() is the latest brand new function that can be used to gain information to retrieve the unmodified input value of the analog stick. It can be used with both left and right analog sticks, get_ipolar() uses 2 parameters in the function, 1st is the stick you want to use and the 2nd parameter is either Angle or Radius. Only Angle or Radius can be retrieved at once.

Either the unmodified angle or radius will be returned depending on the given parameter.

﻿﻿get_polaris a brand new function that can be used to gain information on the current angle or radius of the analog stick. It can be used with both left and right analog sticks, get_polar() uses 2 parameters in the function, 1st is the stick you want to use and the 2nd parameter is either Angle or Radius. Only Angle or Radius can be retrieved at once.

get_info is a new function that checks the active state of the MK Profile. A MK Profile has upto 6 different states as follows (0 = HIP, 1 = ADS, 2 = AUX1, 3 = AUX2, 4 = AUX3, 5 = AUX4). With this information, you are able to script for any specific state and take action accordingly. For example, you can have mods automatically toggle ON/OFF based on if you are HIP firing, Aiming Down Sights (ADS), or using any of the 4 Auxiliary MK profiles. Think of the possibilities.......

<ACTIVE_CONFIG> : Shows the usage for the active config

Active profile in use by MK Settings:

Traces are commonly used for debugging a script and viewing information from a script or game.

For example, if you wanted to see the current value of a variable that was over the 16bit limit you could set a trace using TRACE_1, TRACE_2, or TRACE_3 for the variable to see its value:

With the use of int32 and the 32bit update, you can save much higher values to SPVAR than ever before.

Additionally, advanced developers who use bit packing in their GPC scripts are now able to store twice as much information in a SPVAR as they were before. With 16bit you were only able to store 2 x 8bit values with a range of -32768 to 32767; with 32bit you can store double that amount with 4 x 8bit values.

Here is an example of a Strafe Mod not being possible using 16bit. The new get_polar function is used to return the current radius of the left analog stick. This value is then multiplied by a set number or 50 in this example, then once more by 100 to scale input. Then to scale the value back down it is divided by 20000. The resulting value is then used as a strength that is applied to the left stick to strafe left and right.

Info: While GPC does not support float, a far higher degree of accuracy is achieved by first scaling up and then back down.

Here's an example of scaling a recoil value though this time it is for 32bit. Here the value is much higher which leads to much greater accuracy when calculating a value. The value seen in TRACE_3 could be applied to either stick as a polar value leading to much greater results. In the example, the recoil value is scaled up based on sensitivity, deadzone, and a modifier (accounts for attachments).

Here's an example of how you could scale an Anti-Recoil value using 16bit. Though due to value limitations and truncation you do lose a little accuracy.

The 16bit compiler is still available for older scripts not designed for 32bit. If you get an error while compiling a script, it's likely because you're trying to compile a 16bit script in the 32bit compiler - or the script has deprecated functions that no longer work and needs to be updated. 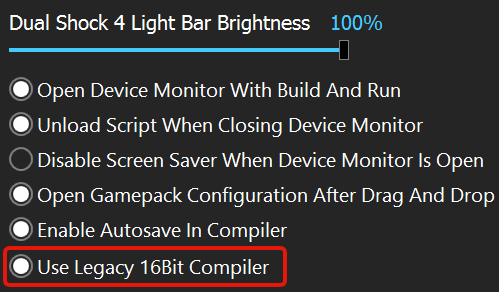 UP NEXT
Introduction
Docs powered by archbee

UP NEXT
Introduction
Docs powered by archbee